I had the great fortune of meeting June Sadler this past summer (2013) in the South Carolina Sea Islands. We met at the Penn Center on St. Helena Island. The Penn Center, the site of one of the first schools for newly freed slaves, has evolved into a gathering place for community organizing, retreats, and renewal. Gantt Cottage, where Martin Luther King, Jr. worked on his “I Have a Dream Speech,” sits just a few yards from Arnett House where we stayed. Dow

n another path, past a cemetery, down by a dock near water with a view so beautiful it breaks your heart, is a house that was built for Dr. King that he never got to spend time in. You can feel all of this history when you walk on the grounds of the Penn Center, amidst the hundred  year old trees, moss hanging from their branches—all the life and death and  hope.

We were at the Penn Center for a reason. The wonderful and brilliant Dr. Alexis Pauline Gumbs and Julia Wallace organized a gathering of twenty-one “self-identified queer, LGBTQ or queer affirming Black people who are committed to fulfilling our freedom legacies in our daily lives and our communities” to honor and celebrate th 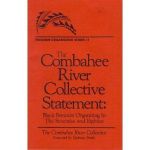 e 150th anniversary of Harriett Tubman’s successful raid on the Combahee River, a raid in which “750 enslaved Africans freed themselves and each other.” The Combahee River Collective, a Black feminist lesbian collective, also takes its name from this uprising.

It was in this transformative liberating space,  on the porch of Arnett House that June told me about her ebook, Dada’s Return–Scorpion: Sting. We talked about Black female superheroes, or the lack thereof. My knowledge of fantasy, sci-fi, comics, and horror is severely limited, but in talking with June I realized just h

ow much. I could name maybe one Black female superhero. “There are super powered people in our real history that did good deeds,” says June. “Our legacy is rich with people that stood up for what is right. Harriet Tubman’s story and so many others like her, showed me that everyday people are capable of uncommon feats.”

This brings us to Dada’s Return. June says Dada’s Return has been described as a combination of “Charlie’s Angels, Mission Impossible and the A-Team.” I don’t remember any relationship between two Black women in any of those things, but you can find it in Dada’s Return, along with a woman who’s equipped with scorpion-like skills.  June hopes to eventually turn the series into a graphic novel. It’s a fun read, but it’s also, as June says, necessary: “We have to write our own stories. Why wait for anyone else to do so?”

So meet Dada:  “not your average superhero. Though known to don a pair of lightly tinted glasses, she doesn’t wear a mask or a cape, though she would stand out for having the latest runway look. Dada uses her intuition, her chi strength, and the capabilities of her team to fight crime. She can’t tolerate injustice of any kind, but especially to animals and children. She’s a warrior.”

Who better to interview June about Dada’s Return then Dada her own self. (Interview by June Sadler)

DADA’S RETURN–SCORPION: STING
DADA code name Scorpion is head of a trio of rogue outcasts in a clandestine organization known as the Consortium. After years of being sequestered in a sub-dwelling within the confines of Consortium headquarters

unfairly punished for a case gone wrong her time has been spent creating the Burrow. Dada once thought she worked for a group that maintains the balance of good in the world, until she was set up as a scapegoat. A secret mentor on the inside has been steadily supplying her with equipment, gadgets and tools for the Burrow where Dada soon discovers multiple enemies in cahoots against her utilizing Consortium resources to destroy her once and for all.

JUNE: You are me. At least all of the good things and my interests amplified. You are a conglomeration of African queen, warrior princess and timeless goddess. You are an amalgamation of a zeitgeist of cool class, grand clothing, sleek cars, gotta be there places, exotic food & drinks and million dollar homes. You are a female James Bond. You have the same style and sophistication with a dollop of hip hop. Dada knows the streets and the board room. Like the other members of her team, she is also a genius. You were born to represent a new cultural lifestyle of goodness for the empowered masses.

DADA: Why did you create Dada’s Return?

JUNE: I created this story because I wanted to read a story with an African-American woman that tells the truth of us. I also wanted her to be very unique as an action “shero.” Dada is a double goddess made to reflect our her-story,autonomy, and female sovereignty. I created the story so my nieces and nephews had a story that illustrates the goodness of African-American women as a real legacy. DADA masters kundalini energy/chi, meditation, and anthropomorphism via the scorpion. The story highlights aspects of tales told by griots who illustrated that we are not only part of the Earth and its rhythms, but have the capacity to use that vibration to empower ourselves. In simple terms, its the super hero lying dormant within each of us awoken.

DADA: Who exactly is The Consortium? What do they do and why do I work for them?

JUNE: THE CONSORTIUM is a group of wealthy, smart, “do-gooders” that work behind the scene on the world stage to bring justice to criminals way too rich and above the law to ever be punished by conventional courts. They’re economists that have studied capitalism and figured out its weaknesses. They then redistribute wealth so the playing field is evened. They identified you as a student when you attended DIRT ACADEMY. At that time you led a group of teenagers to get back your suite mate’s father, a Pakhan in the Russian mafia that was kidnapped by his own elite group for money and status.

DADA: Yeah, that was a scam called the Trade N Raid. It worked because everyone teamed up. Why did you choose the team I have now?

JUNE: I wanted to showcase knowledge of mind, body and the gifts of spirit. CYPHER represents mastery of communication. She speaks about nine languages and that doesn’t include the computer codes and languages she uses that allow her to open any door or digital lock. Kham is the guru of illusions, infiltrations and cultural immersions. He also trains the team in multiple degrees of mixed martial arts. Once CYPHER opens the door, he tells the team how to blend in. He embodies the character in The Spook Who Sat By The Door. Together, you use intuition, technological skill and disguise to infiltrate nefarious crime organizations.

DADA: Where will we go next?

JUNE: Dada’s Return is the first in a trilogy. The next story, Scorpion: Strike, has the team taking down a human trafficking ring that makes young women fight for sport. It’s the team versus She-Gladiators. Get ready for a lot more action and fighting.

June Sadler is a writer with vision. Inside the creative mind of June Sadler is a place she has designated the BLASH! Universe. BLASH is an acronym standing for Be Like A Super HER(o). In that space, her imagination fuels an expanding star enveloping interactive media. The universe includes documentary films, uplifting imagery, and rhythmic verse bundled in melodies wandering the musical galaxies between soul and hip hop. Laden with memories of childhood cartoons of super-powered characters, June is heavily influenced in her writing by the hero’s pledge to do good. The Scorpion Series is her second internet publication. The premiere e-novella of the series entitled Dada’s Return – Scorpion: Sting is an introduction to Dada’s life of intrigue as a rogue African-American undercover spy. Dada’s clever antics coupled with her teams almost prank like precision is the adventure from your dreams. @iblashu

This Friday, September 13, in Greensboro, NC, June will close out the QPOCC’s (Queer People of Color Collective) Pride Event. As a featured performer, she’ll be performing songs from the soundtrack of Dada’s Return.

KIMBILIO
dothprotesttoomuch.wordpress.com/
A Will to Love

An online Technology site for the latest reviews on mobile apps, gadget, and social media services